For decades, professionals across the globe have accepted a workday that generally ranges from seven to nine hours and a work week that ranges from 35 to 45 hours. And until the fairly recent rise of remote work, solopreneurship, and other less-conventional ways of working otherwise conventional jobs, this standard has gone mostly unquestioned.

An eight-hour workday is necessary to be productive and successful…right?

Wrong. As it turns out, the “eight hour rule” does not have its origins in a primal human instinct, but in a somewhat arbitrary standard determined by a Welsh labor activist in the 19th century (more on that in a minute). In fact–as research is now revealing–we may in fact be more productive when we do less.

Ultimately, however, the “right” amount of working hours depends on the individual and the type of work. In this article, we’ll take a look at some surprising research about productivity, focus, and well-being…and how you can create a working schedule that’s ideal for you.

The Origins of the 8-Hour Workday

As mentioned above, the eight-hour workday was first conceived by a Welsh labor activist in 1817. In response to the grueling lack of limitations on the average work day (often resulting in 16-hour days for factory workers, for example), Robert Owen proposed that proper work-life balance could be achieved by eight hours of work, eight hours of recreation, and eight hours of sleep.

Thus, the modern work-week was born. That being said, experts then believed that the 40-hour week would only decrease in length over time, aided by innovation and automation. In fact, in 1930, economist John Keynes predicted that our current generation would only be working 15 hours a week–an optimistic prediction that clearly didn’t pan out.

Despite our rapid advances in technology, we still find ourselves enslaved to the idea of “working” for eight hours or more in order to feel accomplished and productive. Click To Tweet The average office worker in the U.S. spends 8.8 hours per day at work (according to the Bureau of Labor Statistics)–despite only being productive for 2 hours and 53 minutes of that time.

As more professionals have turned to freelancing as a full-time or part-time source of income (in 2019, freelancers made up 35% of the U.S. workforce), however, the eight-hour workday has come increasingly into question. If you find yourself accomplishing far more in a few hours at home then in a full workday in an office, you’re not alone. And, the novel “Work From Home” (WFH) lifestyle as a result of COVID-19 has only changed our perception of productivity and focus even more.

Is eight hours optimal for focusing on the task at hand…or could it be preventing us from doing our best work?

Alright, so we might have a hunch that eight hours isn’t ideal–or necessary–for accomplishing all that we need to during an average workday. But what do the experts–professors, researchers, and social scientists–have to say about this?

Let’s see how a few “productivity experts” weigh in on the topic:

The Secret of “Deep Work”

Cal Newport is a Georgetown professor of computer science and the author of several books, including Deep Work: Rules for Focused Success in a Distracted World. Newport claims that 3-4 hours of deeply focused, uninterrupted time will help us maximize our productivity…and change our lives at work by making us more skilled, efficient, and ultimately, competitive. 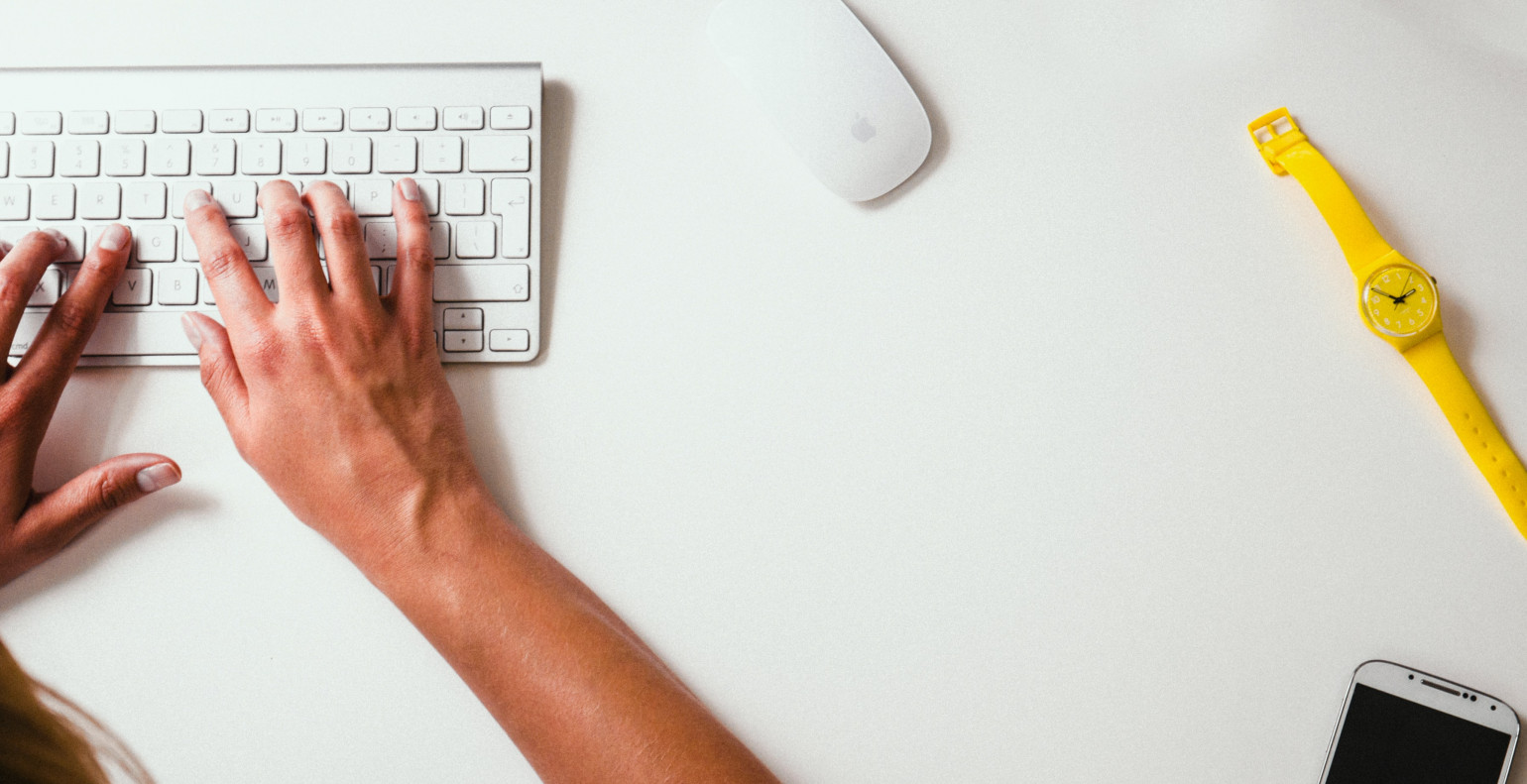 Consider the statistic above. The average professional in America spends 8+ hours a day at the office…but is unfocused for well under half that time. They still accomplish what they need to; but they effectively waste the rest of their time getting distracted and doing half-hearted multitasking.

Newport’s idea of “deep work” proposes that by applying intense concentration and discipline, we could get much more done, more quickly.

The Power of Valuable Work

Daiga Kamerade-Hanta is a work and employment sociologist that believes that we should shy away from focusing on quantity in general when thinking about work.

Rather than focus on how many hours we’re working, we should think about how valuable the work actually is. Hanta has found that when we’re engaged in meaningful work, we’re far more likely to achieve a better state of well-being overall.

Steve Glaveski is an entrepreneur and productivity expert whose mission statement is to “unlock the latent potential of organisations and people to create more impact for humanity and lead more fulfilling lives.” Glaveski frequently explores the ideas of productivity and efficiency to help us all do a little better and work a little smarter….and he hasn’t left the eight-hour workday unchallenged.

In fact, Glaveski conducted an experiment in 2018 to see if six hours, rather than eight, would produce the same results at his own company–Collective Campus, an Australia-based innovation accelerator. So, he directed his team to engage in a six-hour workday for two weeks–and found that their productive output remained the same, or in some cases, increased.

Glaveski is not the only one to catch on to the six-hour experiment…In fact, the entire nation of Sweden trialed a six-hour workday in specific sectors for two years. The results? Increased happiness and health, and potential cuts in healthcare costs (after all, burned out employees are far more likely to get sick).

Using Timing to Create a Work Day That Works For You

Ultimately, a work day shouldn’t necessarily include a prescriptive recommendation; whether you need to work four hours, six hours, or even eight hours will depend on your industry and type of work. What’s most important is that you design a work day that works for you–maximizing productivity and efficiency, and ideally, helping you to achieve a better work-life balance.

Here’s how to use Timing to strategically schedule your work days and make sure you’re getting the most out of your working hours:

Timing offers valuable insight into your current time usage by providing a detailed breakdown of both quantity and quality of your working hours. How many hours are you actually spending on work? And what are you doing during those hours and minutes?

Timing’s Overview tab allows you to see a helpful breakdown of your working hours and minutes, with more in-depth details on the Review tab. Taking an honest look at how you’re actually spending your time should help you get a start on improving your schedule–are you, like the average office worker, spending only a few productive hours per day in front of your screen, despite feeling like you’ve spent all day at work? Timing can help you gain this insight…and then make positive changes. 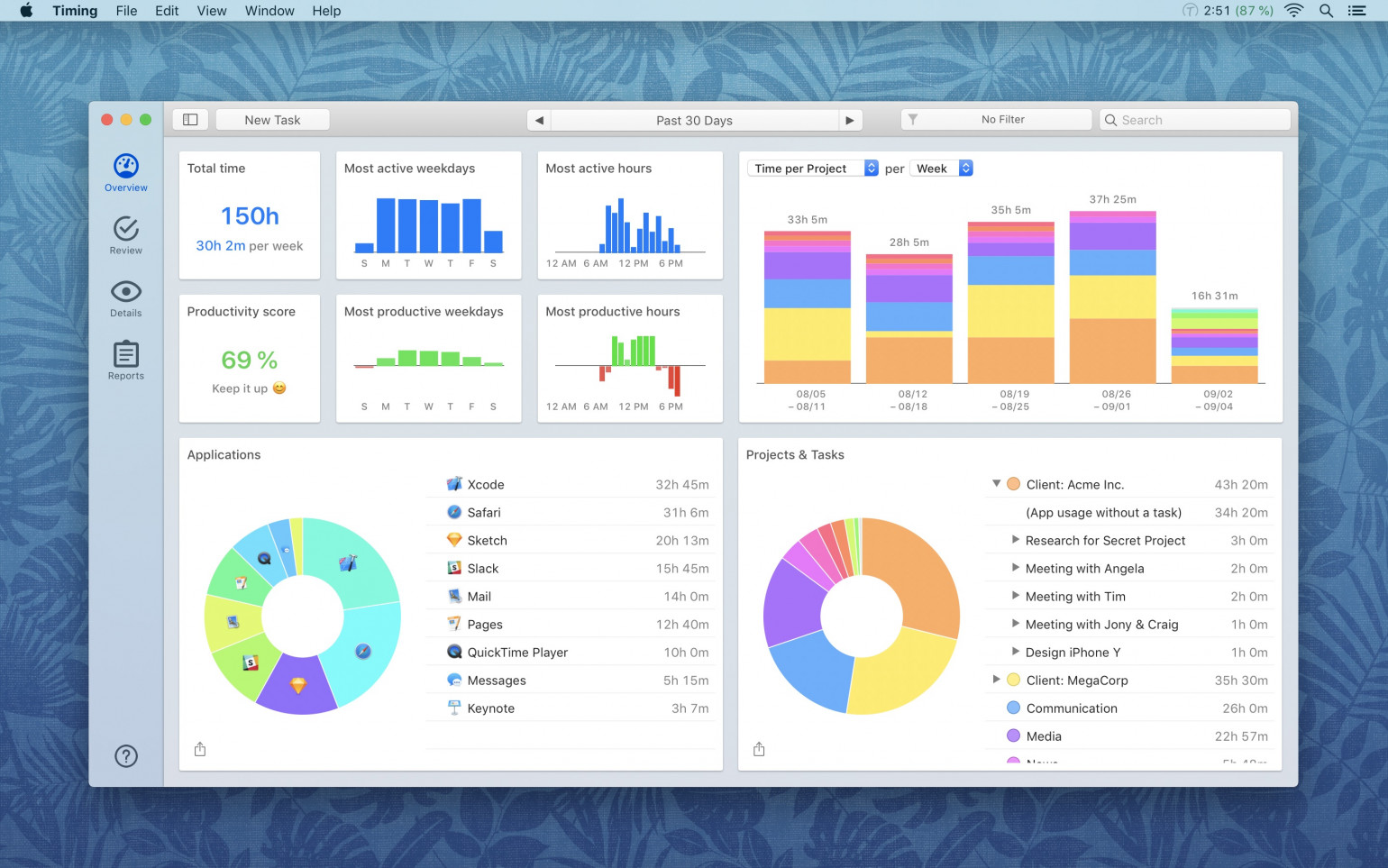 If you typically spend eight or nine hours a day sitting at your computer, we propose cutting that time in half and seeing if you can achieve the same amount of work.

Timing should help you stick to this goal and monitor how you used your time to knock out tasks and meet deadlines. For example, if you have a project that involves writing up a draft in Microsoft Word, how long did the assignment actually take you when you were on a tighter deadline? Timing will help you to see exactly how much time you spent in Word, and where you may have gotten distracted.

How to Maximize Your Productivity

By creating a more organized, strategic system for time management, you ultimately produce a more efficient, potentially shorter work day. Timing allows you to organize your work by project, client, or account, and then assign keywords to those categories to automate detailed time-tracking. You can also use Timing to generate reporting on your work and invoice clients to reduce administrative burden and create even more space in your schedule for a faster, more productive workday.

Lastly, you can use Timing to gauge your productivity at different points in the day. Are you most productive early in the AM, or do you get your best work done in the late afternoon? Timing will identify your most active and productive hours to help you decide not only how much you need to work to be productive, but when.

Productivity is Not “One Size Fits All”

Ultimately, you may find that you’re able to accomplish all your working obligations in just four hours a day. Or maybe you need six or more hours to knock out all your tasks. Maybe, a long break in the middle of the day helps you refocus in the afternoon–or maybe, it derails your day. In any case, productivity is not “one-size-fits all.” The important thing is to figure out what works for you–and Timing can help you get there. To try Timing for free for 14 days (and to see how it can transform your productivity in just two weeks), click here.

Are You an Attorney? 3 Things You Should Be Doing on Timing Why Time Management is Key to Building Your Income